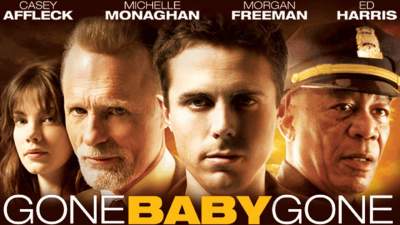 In a run-down neighborhood in Dorchester, Boston, four year-old Amanda McCready has been abducted along with her favorite doll, Mirabelle. P.I. Patrick Kenzie and his partner and girlfriend Angie Gennaro witness a televised plea for Amanda’s return by her mother, Helene, amid a media frenzy. The girl’s aunt Bea and uncle Lionel hire them to find Amanda.

Using his connections in the Boston crime underground, Patrick discovers that Helene and her boyfriend “Skinny Ray” were drug mules for a local Haitian drug lord named Cheese, and had recently stolen $130,000 from him. After discovering Ray has been murdered by Cheese’s men, Patrick and Angie join detectives Remy Bressant and his partner Nick Poole in investigating the case. They believe that Cheese may have taken Amanda. Helene tearfully makes Patrick promise to her that he will bring Amanda home alive.

Patrick meets with Cheese and tries to negotiate the return of Cheese’s stolen money in exchange for Amanda, but Cheese initially denies any involvement in the girl’s disappearance. Police Captain Jack Doyle later reads Patrick a telephone transcript of Cheese calling into the station to set up an exchange for Amanda. The exchange at a nearby quarry is botched after a gunfight breaks out, and Cheese is killed. It is believed that Amanda fell in the quarry’s pond and drowned; her doll is retrieved from the water and returned to Helene. Doyle, whose own daughter was killed years before, goes into early retirement following public outcry over the mishap.