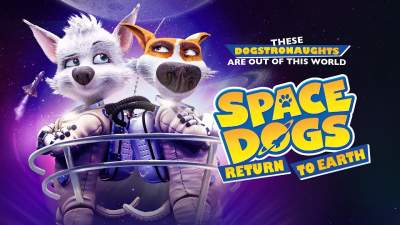 A man in black is carrying a small cage from the Soviet Union to the U.S. President Kennedy. In the cage is a present from Krushchev to Caroline Kennedy, a puppy named Pushok. He finds the other Kennedy pets and tells them his story.

Three years earlier, in Moscow 1960, a strange man showed up, who was catching street dogs and taking them away. Once he tried to catch a dog named Strelka, but she ran away with her friend, the rat Venya. Then, Strelka went to go dig for bones and Venya went to a pay telephone to get some money.

Meanwhile, while Strelka was running from the strange man, at a local circus there was a bad situation at the circus: Vova, a pig, became too fat to fly on a rocket, and Belka, a dog, flew instead of him. But Belka lost control of the rocket and flew away from the circus. After some time she crashed onto the pay phone where Venya the Rat was looking for coins. The crash broke the phone and Venya got all the money from the broken phone. After the crash Belka, Strelka and Venya were met by three other street dogs: a bulldog named Bula, a pug named Mula and a mutt named Pirate. Belka and Strelka ran from the other street dogs but the next morning all three of them were caught by the strange man.